Workshop for journalists on migration and forced displacement, Casablanca

As part of the MADAR project, SENICAR in partnership with Réseau Marocain des Journalistes des Migrations organised a workshop for media and journalists on 15th and 16th March 2022 in Casablanca.

Read the full report below. 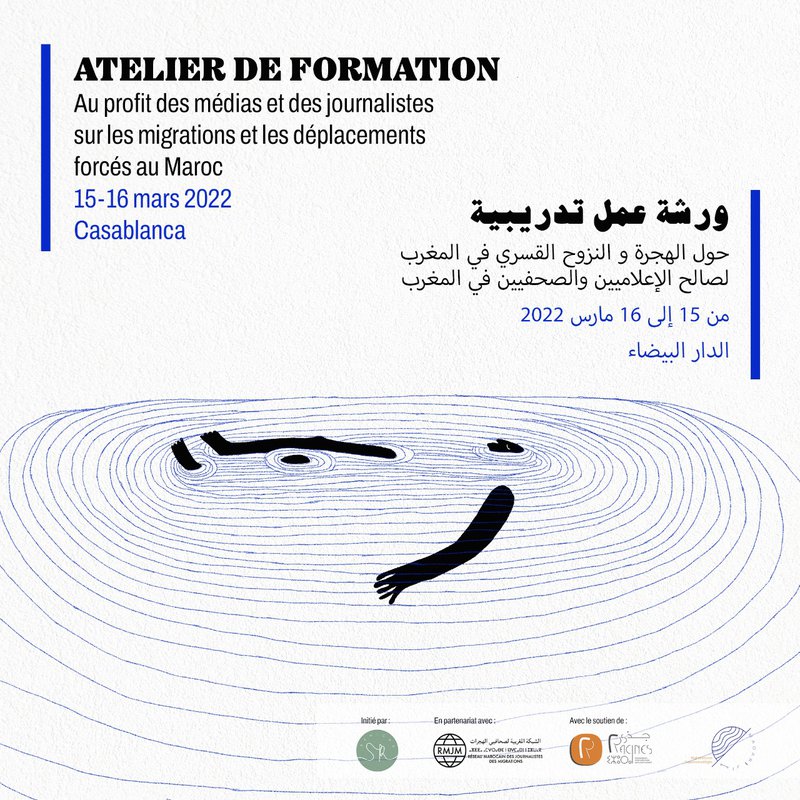 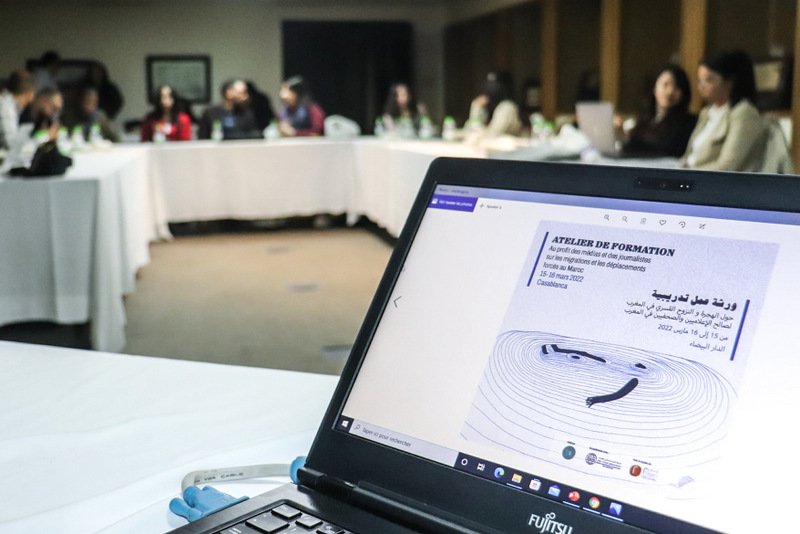 'Towards a professional and pluralistic media coverage'

The first day of the training programme opened with a general presentation of MADAR Network Plus and RMJM. 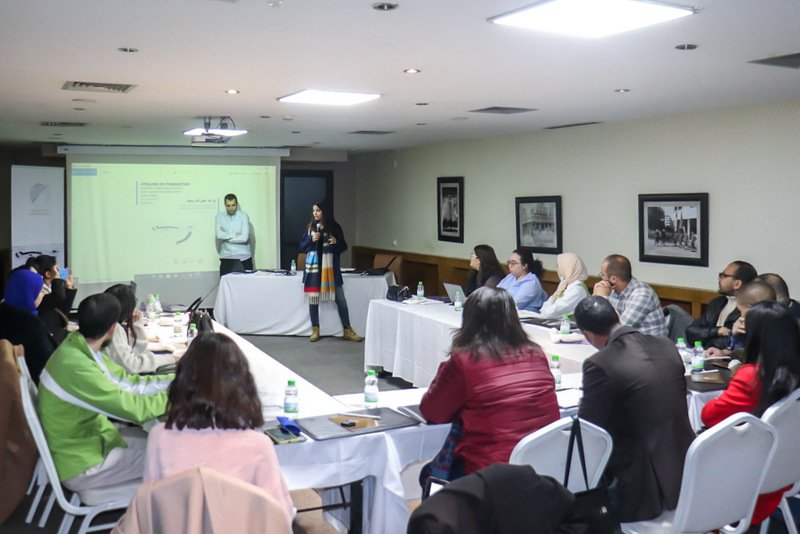 Rajaa Essaghyry, general coordinator of MADAR project, began by thanking the participants for their presence and then proceeded to present the work carried out by the MADAR network and more specifically its activities in Morocco; In particular, those that are currently being finalised, such as a documentary film about the daily life of migrants in Morocco and a research on the context of migration and its legal framework within the country. The study will highlight the roles of civil society organisations, the developments and gaps of the national and international legal framework governing the issue of migration and forced displacement. It will also include key statistics including dates and major events that have had an influence over the Moroccan context. The study will suggest a series of recommendations on steps that should be taken in terms of laws, their implementation by the government and in terms of civil society work (working through arts and culture to change mentalities, fighting racism and xenophobia).

Salaheddine Lemaizi, Moroccan journalist, founder of ENASS Médias (the media of the voiceless in Morocco), a human rights defender and president of the RMJM, first insisted on the importance of the work carried out by MADAR Network plus in the Moroccan field and the rest of the world, followed by an introduction of the actions of the RMJM and mentioned the need for the continuity of advocacy in everyday life.

He invited the participants to introduce themselves in a round table discussion before proceeding with the presentation of the full programme of the training.

First session in the training:

Miryame Massaia: Senior Communication Assistant at the IOM, the International Organisation for Migration, in the Office of Rabat.

Miryame started her intervention by introducing IOM: as an intergovernmental organisation that has been promoting a human and well-ordered migration since 1951, IOM plays a key role in supporting the realisation of the different areas of intervention that link both humanitarian aid and sustainable development.

The IOM Morocco mission focuses its activities around three thematic axes, which are protection and resilience, migration, governance and development, and youth support.

She also distributed to the participants the IOM Journalist's Guide, which is a reference in media coverage of migration based on international law and factual data.

Second contribution of the training :

Their intervention addressed the following topics:

The United Nations refugee agency was created in 1950 in the aftermath of the second World War to help millions of Europeans who had either fled or lost their homes. It had a three-year mandate to do the work and then had to disappear.

Today, more than 70 years later, the organisation is still active, protecting and assisting refugees around the world.

The ability to understand and differentiate between :

The first one has the following objectives :

Promote the conditions for a safe and dignified return to the countries of origin.

While the second one strives to reduce the risks and vulnerabilities that migrants face at different stages of their movement by promoting the respect, protection and fulfillment of their human rights and by providing assistance and care, and to mitigate the negative and structural factors that prevent people from finding and maintaining sustainable livelihoods in their countries of origin and force them to seek a future elsewhere.

4- Some key indicators, from the work of the UNHCR in Morocco:

At the end of the first session of the workshop, there was an additional hour of Q&A session with the participants.

All three speakers provided clarifications on the issues of asylum claims, international law and particularly about the recent Ukraine/Russia conflict.

Several key data were shared with the participants during the training, for instance on the percentage of migrants in the world (3.6%), the number of Moroccans seeking asylum in the world (4500).

As opposed to what is conveyed through the media, South-South migration is more important than South-North migration.

The lunch break and the setting up of the working groups. 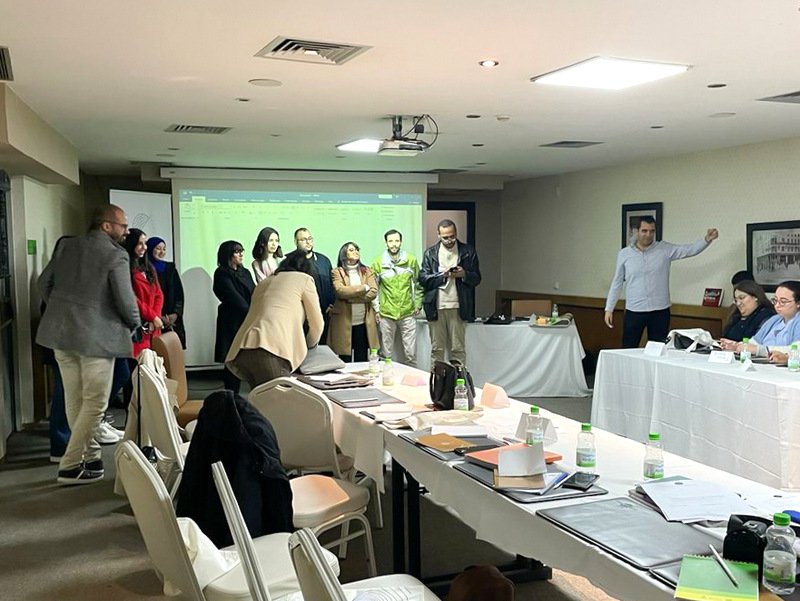 Third contribution of the training :

Journalist since 1996, Hicham has worked for several media institutions, including Al Bayane, where he was in charge of the society page. Between 1999 and 2002, he was Africa Magazine's correspondent in New York. He also worked on the society pages of the weekly newspaper from October 2004 until the magazine's closure in January 2010.

During his career, Hicham Houdaïfa has mainly worked on socio-economic issues: freedom of worship, women's rights, the situation of migrants, etc. He is also co-founder of EN TOUTES LETTRES, a publishing house specialising in journalistic essays, where he directs the series Enquêtes, he is also an active member of the Moroccan Network of Migration Journalists (RMJM).

Hicham's speech was about an hour long, during which he shared with the participants his passion for investigative journalism and gave practical advice based on his own experience.

He claimed that in the field, curiosity is the key word and that all things are open to investigation: it can start with the "child" who works in the neighborhood grocery shop and end with the dismantling of a network of exploitation of minors.

Hicham also presented his work on religious extremism in Tangier, and highlighted the key elements of any investigative work:

● Identification: Identify anyone who can help with the investigation (people in the neighborhood, civil society, etc.), by first explaining precisely the reasons behind the journalistic work. When people see that the work will serve the public interest and the truth, they give all the resources the journalist needs.

● Research: Research is essential before going into the field.

● Gathering information: Write while doing the fieldwork so as not to lose the atmosphere that is supposed to give color to the text.

Hicham then handed out the book "Migrations au Maroc! L'impasse?" to all participants, which is a collective work of the journalists of the migration network.

The fourth contribution of the training :

Khadija is an associative activist who has chosen to return to Morocco and to devote her career to migration-related issues, as she is herself a person with a migratory background.The intervention of Khadija was brief and dense.

She first introduced the work of the association GADEM (Groupe antiraciste d'accompagnement et de défense des étrangers et migrants), which seeks to contribute to an effective implementation of the rights of foreigners and migrants, and to work for the respect of dignity and equal treatment for all, and against all forms of discrimination and racism.

At the GADEM, Khadija is in charge of the 'Moroccan Confluences' programme, which sets up various actions, including:

● Elaboration of popularisation, awareness-raising and training tools for the deconstruction of prejudices and stereotypes on migration, a better appropriation of notions related to intercultural exchanges and discriminations, and allowing a better understanding of migration-related issues;

● Organisation of awareness-raising and training workshops for a mixed audience of professionals and the general public, and of all ages;

● Organisation of cultural and artistic activities, or other activities, which may allow meetings and exchanges/debates on issues related to migration and the fight against discrimination and racism;

She followed with the presentation of the second edition of the report entitled the “Overview of Discriminations in Morocco” carried out by GADEM, which can be accessed through this link.

This new report aims to update the state of discriminations in Morocco in 2019, to continue monitoring public policies in terms of the fight against discrimination and to deepen its impact analysis on society. She invited all participants to download it and study it in depth in order to have it as a kind of mini-guide.

Concerning the media treatment of migration issues, Khadija insisted on the importance of identifying the difference between the terms racism, discrimination, intolerance and xenophobia, and of avoiding the use of expressions that criminalise individuals (clandestine, irregular...) 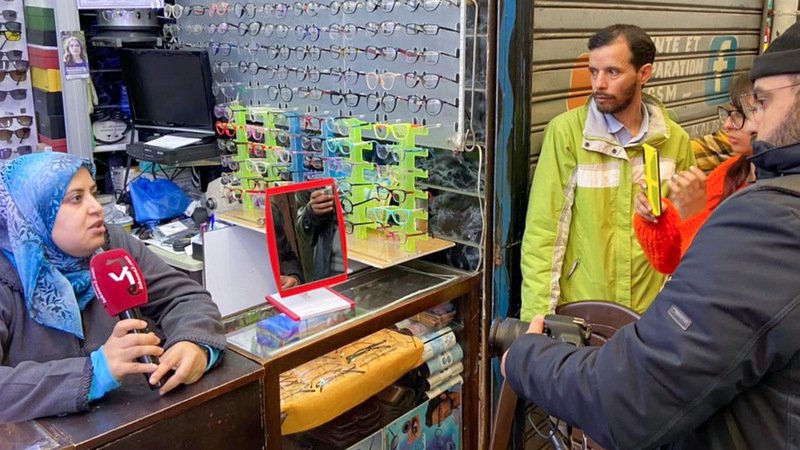 The groups formed on the first day of the training spent the whole morning working with local actors in Casablanca to develop a simulated news report.

Each group worked with a different structure or organisation;

● The Bank of Solidarity Association,

On their return to the training venue, the groups attended a writing workshop conducted by Salaheddine Lemaizi during which they took time to debrief the images and the statements collected from the field trip.

Salaheddine guided each of the groups with practical tips and methods to help them make their work more professionally interesting.

The journalist Salaheddine Lemaizi concluded the training session with a presentation of the various open and available sources of migration data and some recommendations for interpreting this material in an objective way.

Presentation of the group works of the participants

Distribution of the training participation certificates. 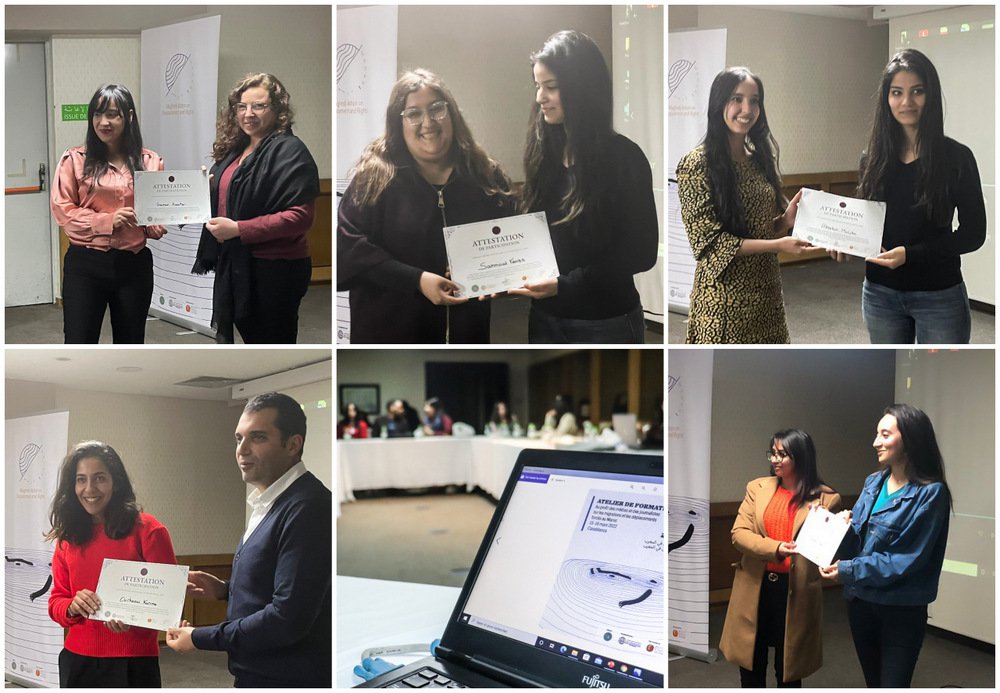 On behalf of MADAR, Rajaa Essaghyry

On behalf of RMJM, Salaheddine Lemaizi

SENICAR is supported by Racines Aisbl.