Webinar: Interculturality and performance - Creative Expression and Mutual Understanding in the Maghreb

Join us for a webinar hosted by the MADAR Network, which will explore interculturality and performance. 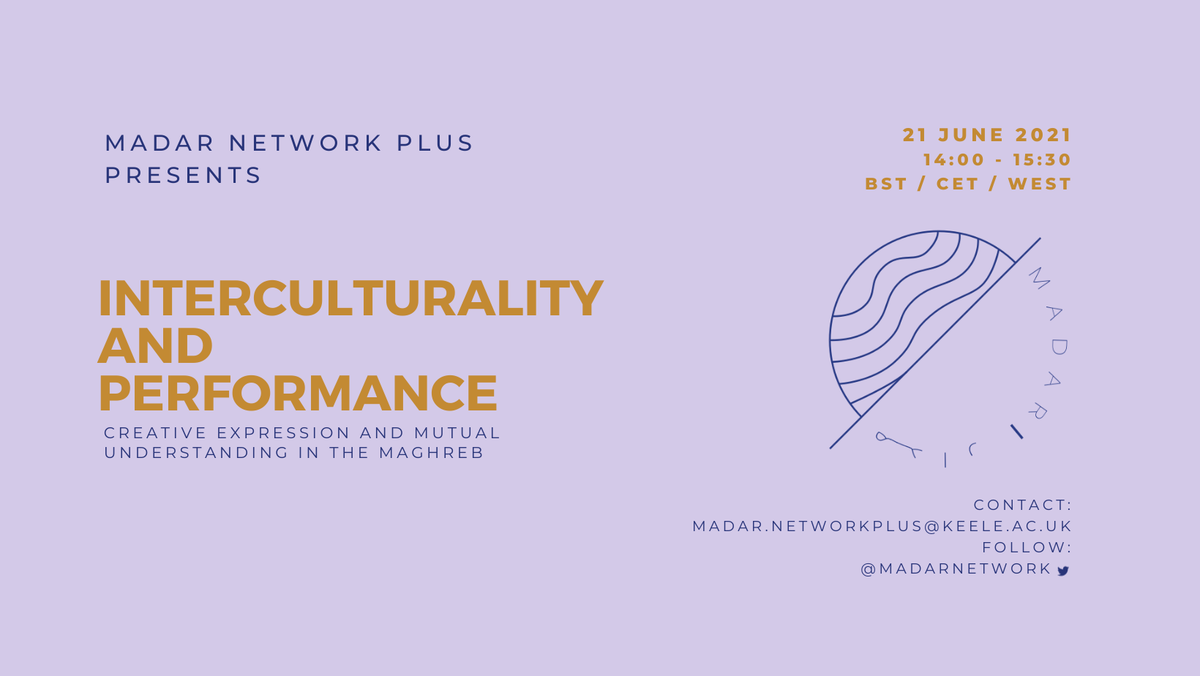 MADAR is hosting a series of webinars, bringing together members of the MADAR network and external speakers, to explore questions and topics – such as antiracist advocacy, action research, and gender in the context of migration– interlinked with the challenges of displacement and protection in the Maghreb region.

The webinar will include short presentations, a Q&A session, and a short recorded musical performance at the end.

The panel will be chaired by Olfa Arfaoui, an award winner Tunisian film producer, and women’s initiatives expert with more than 10 years’ experience in designing, managing, implementing projects, and building multi-actor partnerships in the MENA region, and will include speakers from Algeria, Morocco and Tunisia:

Marouane Hassine is the Co-Founder and cultural project manager of Orchid Association. He is a fellow of the cultural program “CrossCulture program” in Germany, has worked with the German theater companies “Junges StaatsTheater” and “Badisches Staats Theater”, the cultural centre “Latin American Youth Center” in Washington DC, and as a social worker in the field of socio-cultural animation with the International Organization for Migration in Morocco on irregular migration of unaccompanied minors (SALEMM project). His graduation project was on "Culture as a Means of Integration, Case Study: Integration of Latin American Youth and Immigrants into American Society through Cultural Activities". He has also set up many artistic projects to create positive social change and contribute to the resolution of various social problems in Morocco such as immigration, gender, violence against women, radicalization of young people, etc.

Mohamed Benslama is an entrepreneur, musician, teacher of cinema in the School of Art in Tunisia, and founder of several networks in the cultural field. After studying cinema and psychology, he directed and participated in the production of several Tunisian and international films. Aware of the major challenges of cultural policies, he launched the Tunisian Cultural Observatory in 2015, a platform bringing together cultural actors, promoting a participative and inclusive cultural policy, under the association of Our Culture First. He conducted a study on cultural practices with a focus on the south of Tunisia. In June 2016, he cofounded La Fabrique Art Studio to promote young artists and artistic creations. La Fabrique is a collaborative space dedicated to artists and musicians for rehearsals, live recording and bookings. As executive director for Our Culture First, Mohamed is committed to structuring the cultural sector by mobilizing the key players and by participating in the various initiatives implemented by the government, private sector, and civil society in Tunisia and in the MENA region. Currently, he is contributing to the establishment of an African network on cultural policies and to the publication of the inventory of cultural policies in the MENA Region. He has received an award for cultural expertise from UNESCO Tunisia and he serves as mentor and consultant for EU funded projects.

Houari BOUCHENAK has always been passionate about photography, with a sensitivity and openness to the world around him. Self-taught at the base, his approach to photography began at the age of 10, where his subjects were his closest entourage. In 2006, he joined a communication agency where he worked as a photographer-reporter. He then took courses in photography at the University Paul Valéry (Montpellier) and in editing and archiving at the Magnum Photos agency (Paris).

Member and co-founder of the Collectif 220 (www.collective220.net), founder and manager of La Maison de La Photo, which is part of the association "La Grande Maison", he taught photography at the department of arts and the department of architecture of the University of Tlemcen. After graduating in industrial chemistry, he continued his studies in cultural and intercultural project engineering at the University of Bordeaux-Montaigne. The photographic medium is for him a language, but also a field of plastic and curatorial experimentation. He considers his work and his photographs as a testimony for a whole generation, present or future.

La Fabrique Art Studio is a youth-led inclusive network of committed creative artists and activists with the mission to build empowered and resilient communities through culture and art. The webinar will end with a recorded multidisciplinary artistic performance, "D’BARA- دبارة" , produced by a group of young Tunisians who showcase the enormous potential of a creative youth combining various artistic expressions, namely dance, music, graffiti and urban sports.

This event will take place online via Zoom. A link to join will be sent via email on the day of the event.

Please note that the event will be recorded and the recording will be shared on the MADAR website.

Please register via this link below.