Webinar: Migration, displacement, and the arts

Join us for a webinar on 25 May at 14:00 BST, which will explore arts-based methodologies and displacement. 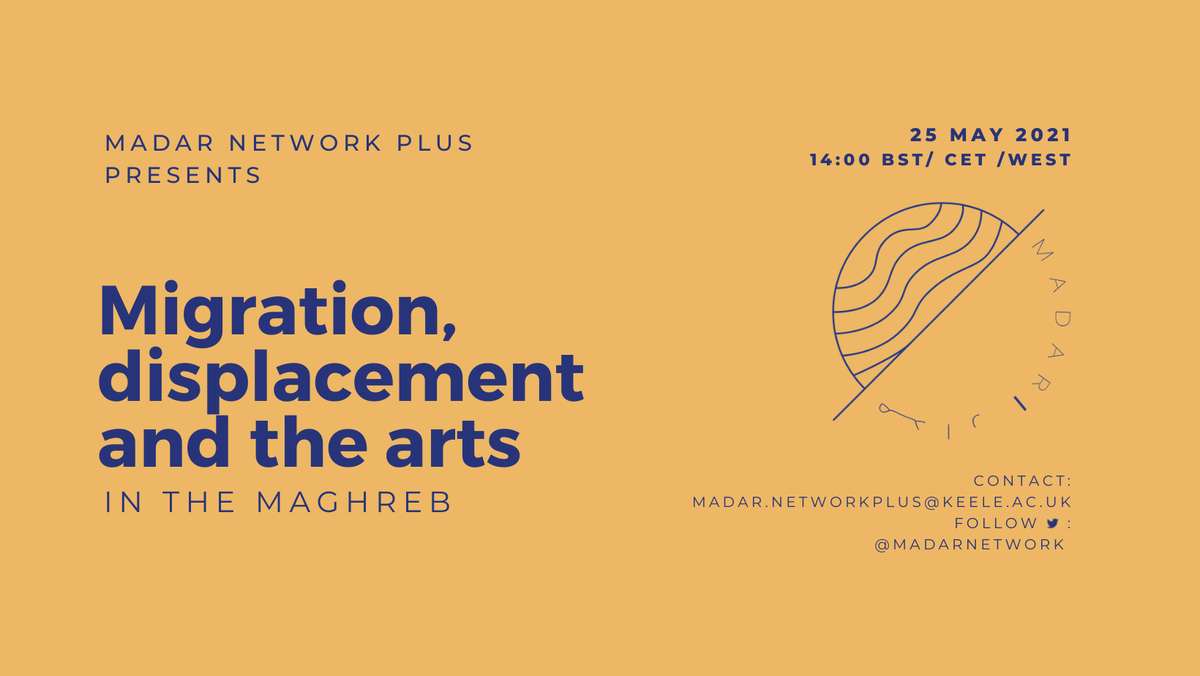 If you missed the event or would like to watch it again, you can watch a recording of the webinar below (in French):


MADAR will be hosting a series of webinars, bringing together members of the MADAR network and external speakers, to explore questions and topics – such as antiracist advocacy, action research, and gender in the context of migration– interlinked with the challenges of displacement and protection in the Maghreb region.

The first webinar in the series will explore arts-based methodologies and displacement. What possibilities do the arts provide for addressing the protection needs of forcibly displaced people? Can arts-based methodologies provide a basis for interculturality, inter-community relations, and preventing harm? How might the arts contribute to change and positive impacts for displaced people?

The panel will include speakers from Algeria, Morocco and Tunisia:

Aadel Essaadani holds a diploma of in-depth studies in urban sociology "Spaces, societies and cities in the Arab world" (University of Tours, France) and a master's degree in urban and country planning (University of Perpignan, France). His doctoral thesis (not defended) was on "Behaviors and attitudes of individuals in the public space of Casablanca" and on self-presentation and the modalities of social interactions between individuals. Aadel is a cultural policy consultant, technical scenographer and educational director of training at the Institut des Métiers du Spectacle (France, Morocco). He led many training and consulting projects for cultural projects and policies in France and Morocco. In November 2014, 2016 and 2018, Aadel organized, with the Racines association, the "General States of Culture in Morocco". Currently, he is the senior researcher for a research project entitled “Arts and Power: Research on the instrumentalization of art and culture in Morocco" funded by The Arab Fund for Arts and Culture (AFAC) and the Arab Council for the Social Sciences (ACSS). The research team members are Dounia Benslimane (cultural operator) and Mohamed Sammouni (political sociologist and journalist).

Olfa Arfaoui is an award winner Tunisian film producer, and women’s initiatives expert with more than 10 years’ experience in designing, managing, implementing projects, and building multi-actor partnerships in the MENA region. She has in-depth knowledge of gender diversity in the economy and society; of impact-driven projects using art and culture for social change; and of managing agile and remote teams within complex frameworks. She worked as a country manager for the Women Economic Integration Programme of the German Development Corporation from 2014 to 2019. In 2018, she was nominated as a changemaker as part of the ‘Challenging Norms, Powering Economies’ initiative, organised by Ashoka, the Open Society Foundation, and UN Women, for her efforts in empowering women and girls. She serves as president for the International Human Development, which deals with women, peace, and security projects. Her passion for empowering girls and women, music, and arts led her to cofound La Fabrique Art Studio, based in Tunis, with a flagship programme for women and girls in the electronic music industry.

Rajaa Essaghyry: After completing a Masters in Marketing and Communication at the University of Hassan II in Casablanca, Rajaa aimed for a career in the cultural sector and therefore began a doctoral thesis which dealt with the following problematic: ‘the factors that influence the consumer’s behaviour in the artistic cultural sphere.’ In parallel, she obtained a European Diploma in the administration of cultural projects organised by the Belgian association Marcel Hicter in Northern Ireland, Iceland and Greece. Graduate of ACAM in Venice (Art Cinema = Action + Management)’s 16th training programme on the theme of ‘Re-think your Cinema’, organised by the CICAE (Confédération internationale des cinémas d'art et d'essai), she went on to be the general coordinator of the training programme (operation/distribution) within the Agence Digitale du Film Marocain (Digital Agency of Moroccan Cinema) in Rabat. It is worth noting her participation in the organisation of several cultural events in Morocco, each as impactful as the next. For example, the General States of Culture with the Racines association in 2018, which was a great success. During her free time, Rajaa is co-writing a hybrid web-series, which deals with the arts, human rights, civic education and the economy.

Sahbi Faysal is a lecturer at the department of information and communication sciences at Oran 1 university. A graduate of the film studies department at the University of Paris 3, Sorbonne Nouvelle, as well as from the Communication department of the University of Oran, he teaches and conducts research both in Algeria and abroad (University of Thessaloniki, Inalco-Paris, IREMAM in Aix-en-Provence, among others). Author of several scientific publications and articles, his research work addresses different themes and questions such as Algerian cinema, the semiology of artistic expressions, Rai, etc.

Please register via this link: https://www.eventbrite.co.uk/e/migration-displacement-and-the-arts-tickets-153949457973